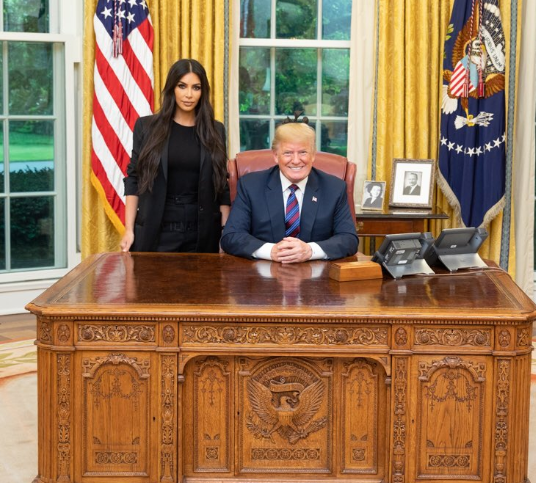 Kim Kardashian speaks out on meeting with Donald trump about Alice Johnson. Kim Kardashian West met with Donald Trump on Wednesday afternoon at the White House to discuss the case of Alice Marie Johnson, a 63-year-old great-grandmother who is serving a life sentence in federal prison for a first-time, nonviolent drug offense.
The reality star has now spoken out about that meeting and what led her to take up Alice's case.
In an exclusive interview with Mic.com, Kim said:

I think that he really spent the time to listen to our case that we were making for Alice. He really understood, and I am very hopeful that this will turn out really positively.

Kim Kardashian sat down with Trump in the Oval Office alongside her attorney Shawn Chapman Holley, to ask him to grant clemency for Johnson, who has been imprisoned for over 21 years in Aliceville, Alabama, for a drug-trafficking charge. Prior to the meeting with Trump, Kim has been working behind the scenes for months to secure Johnson’s release.
She first became aware of the story after watching a Mic Opinion video in October. Since then, Kim has been paying Johnson’s legal fees and discussing the case with White House senior adviser and Trump’s son-in-law, Jared Kushner, who is leading White House efforts around prison reform.
Kim recounted:

I went in, me and Shawn, to really talk to the president about Alice Johnson and really explain to him why she would be such a good person to grant clemency to.
The president seems to have a passion for everything that Jared has been trying to do, and that just makes me happy that that conversation is just moving forward.

Kim has said she has no doubt that Alice Johnson will lead a productive life outside of prison if granted clemency by Trump.

She has a job waiting for her, Kim said.
She has a home to go to, and she has such a great supportive family.
I just really strongly believe that she is someone that has completely rehabilitated herself and will continue to do so outside of prison.