4 passengers arrested in Ondo State for beheading an Okada rider 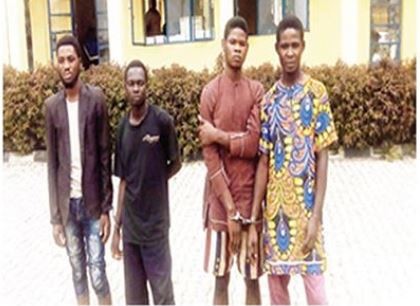 Four passengers arrested in Ondo State for beheading an Okada rider. The Ondo State Police Command has arrested four suspects over the killing of a commercial motorcycle rider, Olawale Gbogi, who was beheaded by the suspects. The four suspects, Abdulahi Sheu, 21, Harruna Suberu, 18, Dada Alabi 25 and Onimisi Liberty, 24, were said to have lured Gbogi out of Ikare Akoko, to a village in Ihima in Kogi state where he was killed.
Speaking during their parade, the State Police Public Relations Officer (PPRO) Mr Femi Joseph, said the suspects were arrested after a formal complaint was lodged by a relative of the victim, Omotomogun Tayo, last month.
According to Joseph, the police swung into action and one of the suspects, Abdullah, was arrested in Akure for allegedly being in possession of the victim’s handset. The PPRO said other members of the gang were arrested after Abdullah was interrogated and confessed to the crime but said one of the suspects has run away with the head of the victim.
He explained that the suspects approached Gbagi to take them to Ihima and agreed on the sum of N3,000 but they killed and beheaded him, leaving his body in the bush. One of the suspects, who is now at large, is in possession of the head.
source:Lindaikejisblog