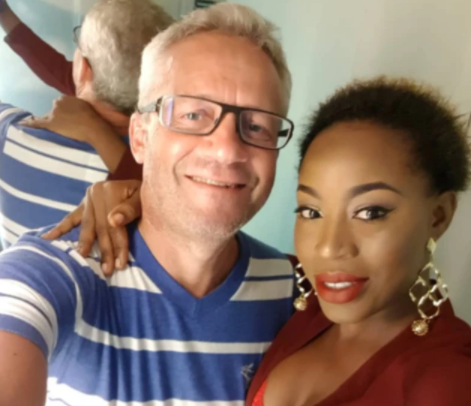 Ali Madaki, father of late Nigerian singer, Alizee who was allegedly murdered along with her 4-year old daughter by her husband has said they want justice to prevail at all cost.

Though the police said they had commenced investigations with the singer's husband, Nielsen Peter Schau being the prime suspect.
Alizee's sister, Gift, alleged that the couple had a fight and she saw the Danish husband hitting her head on the ground.
There are also reports that Peter beat Alizee to coma last year and was made to sign an undertaken that he wouldn't touch her again.
For the death of his wife and four-year-old baby, Nielsen has been arrested and moved to Panti Police Station, Yaba, Lagos. In a chat with GoldmyneTV, Alizee's father said they could not suffer in foreign countries and still suffer in their own country too.
In his words,

"no Nigerian can commit murder and get away with it in their country (Denmark); so, the husband must not get away with what he did. My daughter and her baby were strangled to death because we could see bruises all over their bodies. He could never have been a gas leakage as the husband claimed.
He must not get away with this in our country even though he could get away with it if he had done it in his country. We want our government to pass a strong message to other foreigners with this. If this happens in their country, they will surely execute the Nigerian. Justice must be served as they do in other countries.”