"Who is she?" John Boyega responds to Toke Makinwa's accusation that his bodyguards disrespected her at a bar in Lagos last year 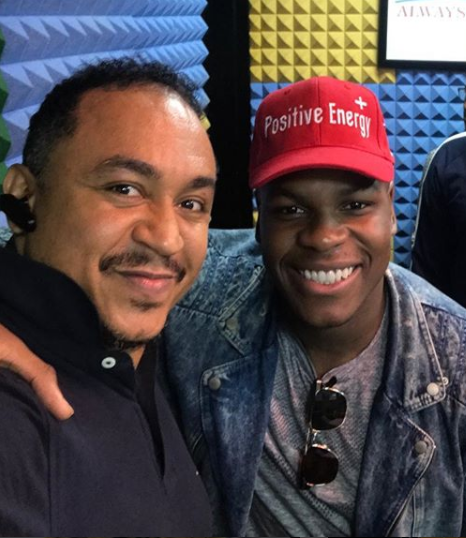 John Boyega, the Nigerian-British actor who became famous for his role in the 2015 film, Star Wars: The Force Awakens, has addressed the issue with media personality where she accused his bodyguards of disrespecting her at a bar in Lagos.
Toke said John's bodyguard's asked the waiters not to serve her a drink because she took an empty seat which they claimed was for John and his team. But John has denied knowledge of this and even says he doesn't know who Toke Makinwa is.
He said this during an interview with Cool FM OAPs Freeze and Kaylah. When Freeze mentioned the controversy the last time John Boyega came to Nigeria, the actor acted completely surprised, as though he'd never heard of the incident Toke spoke about where people from his camp embarrassed her at a bar in Lagos.
Then, the OAPs went on a break and during the break, John immediately turned to Freeze and asked what drama it was he was talking about. Freeze gave him a hint, saying that someone accused him and his people of kicking her out of a bar.
"I didn't kick anyone out at the bar," John quickly said in defence.

"Toke Makinwa reportedly assaulted by John Boyega's bodyguard," Freeze clarified.
"Wait, what?" John asked in shock and others laughed in amusement.
"First of all, who is that?" The star added, eliciting more giggles from everyone in the studio.
But he kept on insisting he's never heard of her and continued asking, "Who is that?"
"I'm sure if I know who the person is, I'd have known your name before I came out. I'd have known you [Freeze]. I don't know everybody on the radio."
Watch the video below, starting from the 6:33 mark.
SOURCE: Lindaikejisblog