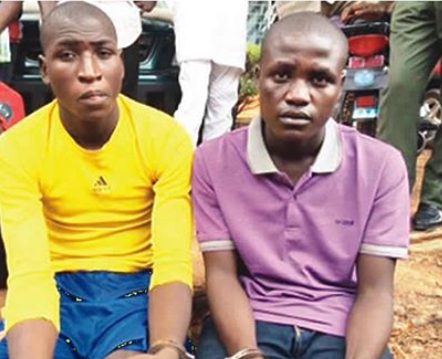 Stephen Gyang, a commercial motorcycle rider, has been arrested by the Plateau State Police Command for allegedly killing his girlfriend, Alice Samuel, and burying her remains in a shallow grave.
Punchng reports that Gyang killed the victim for wanting to force her pregnancy on him. The JSS2 dropout said he killed his girlfriend because she had initially said he was not responsible for the pregnancy.
He said she recanted on the prompting of her mother, who wanted him to take responsibility for the pregnancy. The incident happened in Tahoss village, Plateau State.
According to the suspect: “I decided to bury her that night in a shallow grave that was to be used either for a pit toilet or well. After the incident, the spirit of Alice Samuel did not leave me. She started disturbing me and I had to report to my brother who took the matter to my father. My father thereafter reported my predicament to the village chief.”
His friend and accomplice, 20-year-old Kelly James, who was an eyewitness, revealed that he begged Gyang not to kill the victim, but he refused. He claimed that the prime suspect threatened to kill him if he (James) did not assist him.
source: Lindaikejisblog