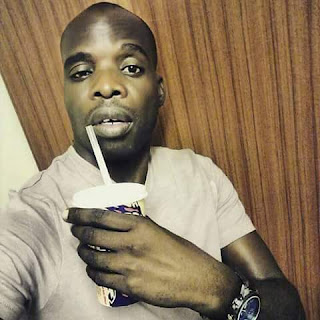 Zimbabwe national,  Kingston Vhiya was stabbed to death in South Africa by one of his pupils, who accused him of failing him in school.
Vhiya, 42, from Masvingo was allegedly killed last week by the 15-year-old Grade Eight pupil, according to South African media reports.
Vhiya was a teacher at Bosele Middle School in Manyeding Village near Kuruman, Northern Cape,
According to a witness Mr Zeky Mangei, the pupil arrived at Vhiya’s house and started throwing stones, breaking all the windows with stones.

"The boy started by throwing stones, breaking windows at the house. He accused Kingston of failing him at school. Kingston told him that he could not blame him for failing and that he should speak to individual subject teachers,” Mr Mangei reportedly said.
“The boy had broken the windows and was able to pull out Kingston’s phone, which was on a charger, through one of them (windows). Kingston then opened the door but was hit by a stone on his chest,”

He said the situation calmed down after Vhiya engaged the teen who later turned on the teacher, stabbing him with a sharp object in the chest.
Mr Mangei said Vhiya was rushed to a local hospital where he later died.
In a statement on Friday, South African Basic Education Minister, Angie Motshekga said she was “horrified” by the stabbing which occurred at the teacher’s home.
Motshekga said “this form of violence needs to be condemned in the strongest possible terms”.
On Friday Northern Cape Education MEC Martha Bartlett visited the family of the slain teacher. She was also expected to visit the slain teacher’s school to establish if there are any particular challenges that need to be addressed and to provide psychosocial services to teachers and pupils.

“The holistic education of our learners is a societal matter, and we all as communities, parents and guardians need to instil in our children the notion that violence is not the answer, problems will not be solved through violence,” said Motshekga.
“We are aware that the area in Kuruman, where the learner is from, faces a number of social challenges, such as a high number child headed households, the break-down of the family structure, poverty and substance abuse among others.
“This therefore makes the role of the community and relevant government entities, in supporting our young people to mitigate these challenges ever more important.”

Vhiya’s sister Ms Mpho Mthethwa, said the family was devastated by the callous murder of their relative. She said they did not have money to repatriate his body.

“It will cost us between R30 000 to R50 000 for the repatriation of Kingston’s body to Zimbabwe. We do not have that kind of money,” said Ms Mthethwa.

Northern Cape police spokesperson Lieutenant-Colonel Dimakatso Mooi, who confirmed the incident,  said the pupil has been charged with murder.
See posts by his family and friends below.. 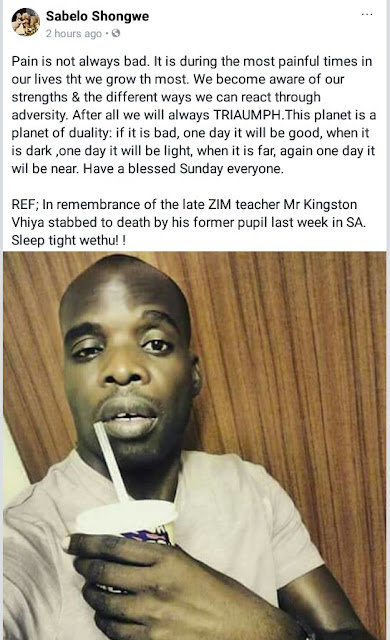 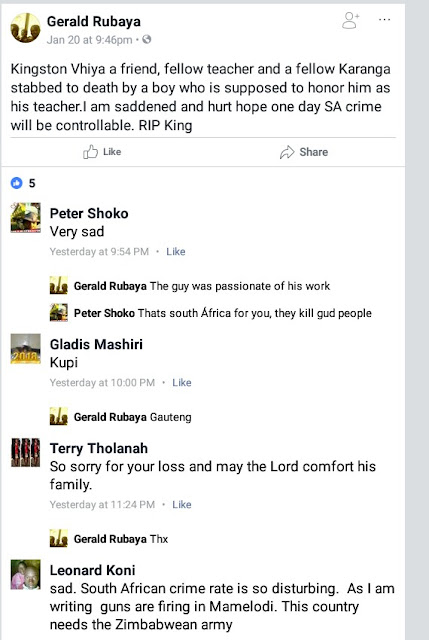