Trending: Man who beat his Wife Allegdly Impregnated her 6ista and Aborted the baby has been Arrested- Naijabomnet's blog 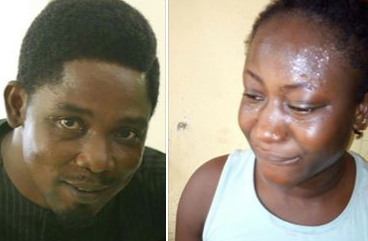 Yesterday, we reported about a 26 year old Rosalyn pictured left, who cried out for help after many years of emotional and physical torture. Rosalyn in her story shared on Facebook user, Mimi Atedze's wall, said her husband had subjected her to many years oemotional and physical battering. She alleged that her husband had impregnated her sister and then carried out an abortion on her.
Mimi Atedze, who shared the story initially, this evening gave an update. According to her, the husband of the distraught woman has been arrested. Read her update below

*UPDATE: SUSPECTED CASE OF DOMESTIC VIOLENCE AND RAPE OF A MINOR*

On receipt of the above complaint from the victim, the NAPTIP Rapid Response Squad reached out to the woman and provided security for her and her two kids. The suspect (husband), Morgans Alepa, M, 37yrs, and a native of Kabba in Kogi State, who left home after the alleged domestic violence was tracked down and is currently in the custody of NAPTIP. The Case which is currently being investigated, will possibly be prosecuted under the Violence Against Persons (Prohibition) Act 2015 which is under the purview of NAPTIP.

A cursory look at the VAPP Act 2015, revealed that, Mr Morgans Alepa could face seven count charge bothering on rape, inflicting physical injury on a person, coercion, depriving a person of his or her liberty, forced financial dependence or economic abuse, forced isolation or separation from family and friends, and emotional, verbal and psychological abuse, among others. It's a commendable feat by the DG of NAPTIP, Dame Julie Okah-Donli, Esq, who swiftly supplied all the required resources to the NAPTIP RRS just to ensure that the case is handled to a logical conclusion. NAPTIP is, indeed, on the move now.
From Fabmimi 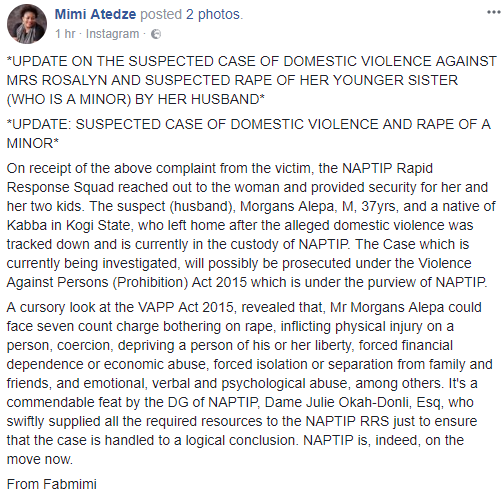