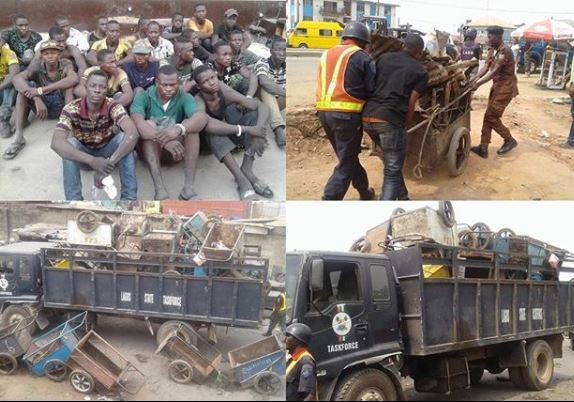 Yesterday According to LIB, The Lagos State Government detained 30 cart pushers for dumping refuse indiscriminately on road medians in some areas of the State in the middle of the night. .

Chairman of the State’s Task Force on Environmental and Other Special Offences (Enforcement Unit), SP Olayinka Egbeyemi, said the arrest was in line with the recent ban on the activities of cart pushers and wheel barrow operators by the State Government. .

Egbeyemi, who affirmed that the activities of cart pushers in the State are illegal, said investigations found them culpable in dumping refuse on the road side especially at night thereby sabotaging efforts by the Government to keep the State clean. .

He said the Government is poised to go all out to prosecute any persons found to be working against the new waste management policy encapsulated in the Cleaner Lagos Initiative (CLI), saying the programme is designed to revolutionalise waste administration in line with global best practices when fully operational. .

“There are reports that refuse are littering the Lekki, Victoria Island, Ajah and other parts of the State and investigations reveal that it is the handiwork of unscrupulous elements within Lagos State Waste Management Authority (LAWMA) and their outside sponsors who are not comfortable with the new arrangement for the management of waste in the State and are hell bent on sabotaging government effort and frustrating them from carrying it out. .

Egbeyemi said the suspects arrested would soon be charged to court for prosecution, just as he assured that Government would leave no stone unturned in keeping the State safe and clean. .

Besides, the Task Force Chairman said that the enforcement would continue across the State until the activities of cart pushers and other unscrupulous elements found to be frustrating government’s efforts are completely brought to a halt.