Federal Goverment Debarrd the Croping of Cattles in Nigeria-Naijabomnet's blog 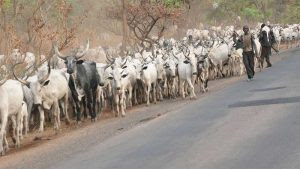 The federal government has debarred the open croping of cattle to reduce the growing anger flashed by the killings in Benue and other states, saying all herdsmen must henceforth farm their cattle.
The decision was taken at the end of a six-hour meeting of a Federal Government delegation, security agencies and five governors.

Presenting the statement after the meeting, Benue State Governor Samuel Ortorm, escort by his Taraba State counterpart, Darius Ishaku, said: “The meeting noted that all animal farmers must ranch their cattle and livestock for better productivity.”

The meeting also admonished Nigerians to live in peace, being the only way to resolve the perennial clashes between the herdsmen and farmers.

It cautioned Nigerians against hate speeches, noting that anyone found engaging in it should be dealt with by the security agencies.

The communique was agreed upon after a meeting of a Federal Government delegation, top security chiefs and five governors, some of whose states are mostly affected by the herders/farmers clashes met.

Dambazau said the meeting was to primarily share experiences among the stakeholders and agree on measures to tackle the menace.
Ogbeh said the inability of government to pay attention to herdsmen and cow farming, unlike other developed countries, contributed to the killings.